Home » Kids » Warning Signs That Your Child May Be Being Bullied 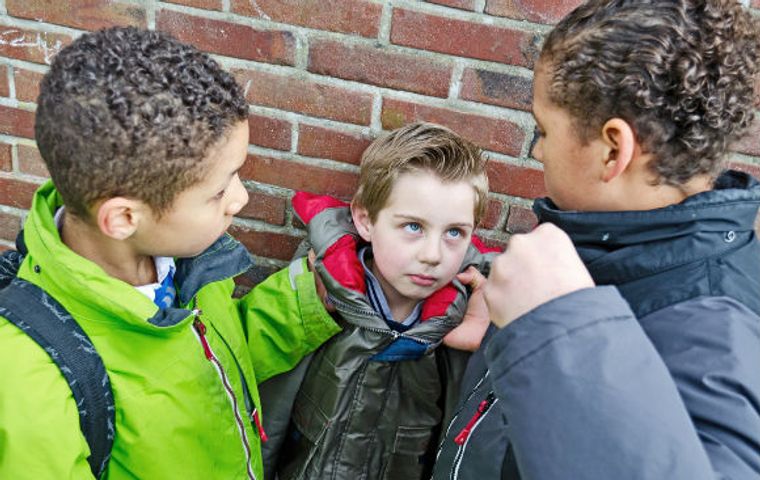 Warning Signs That Your Child May Be Being Bullied

The biggest, most intimidating kid at school with the strongest fists and most aggressive personality is no longer the stereotypical school yard bully.  In fact, today’s bullies don’t steal lunch money; rather they ruin reputations and create hurtful rumors using the internet and social media.

However, the negative effects of victimization from a bully are still the same—with kids resorting to depression, social withdrawal, physical injury, addiction, self-harm, and even suicide.  Here are 10 signs to watch out for if you think your child may be the victim of bullying…

Current U.S. research indicates that roughly 1 child is bullied every 7 minutes. Often and sadly, victims of bullying behavior will attempt to hide any trace. However, physical indications can still exist in addition to behavioral changes (i.e., social withdrawal, depression, self-harm, and even suicidal thoughts). Look for bruises, cuts, or scratches that can’t be a result of regular teen activities (i.e., team sports). For instance, black eyes are not often a result of normal childhood or teen roughhousing.

In fact, research from several American studies, indicate that one-tenth of bullied students admit being shoved, forcefully handled, spit on, tripped or pushed down by another student. This physical abuse does leave more than the normal teen bumps and bruises.

If your growing teenage son loses his appetite out of the blue, or is unexplainably ravenous even though you sent him to school with a packed lunch, he may be suffering peer victimization at school. For instance, a child that completely loses their normally healthy appetite may be suffering from depression or social withdrawal.

On the other hand, a child that is sent to school with a hearty lunch and still returns home hungry and eats like they haven’t had any food all day, likely hasn’t. There could be another child at school stealing their lunch or lunch money. Or the child could be so afraid that they hide over the lunch hour to avoid bullying rather than taking lunch with their fellow students.

The U.S. Departments of Justice and Education found in a 2011 ‘Indicators of School Crime and Safety’ survey that 5-percent of 12- to 18-year olds admitted missing school due to being intimidation by another student. The study was carried out on  American schools during the years 2009 through 2010 and focused on teacher injury, drugs and alcohol at school, fights, weapons, and general perceptions by students regarding personal safety when at school.

Bullying is not just a physically abusive or verbally abusive act. In fact, according to a 1994 study by Ahmad & Smith, bullying can be made up by a combination of aggressive behaviors like hitting, teasing,  threatening, verbal abuse, and stealing that are initiated by one or more students against one single victim.

For instance, according to the research, it’s common for direct physical assault to decrease with age (in middle and high school years). However, other bullying behaviors, like stealing and intimidation, can become more rampant as kids age. Kids can steal electronics, toys, jewelry, money—and more. This means, if your normally responsible child is losing or returning home with destroyed valuables, they could be suffering intimidation.

There’s more than meets the eye when a decent student suddenly, and without explanation, loses interest in doing well at school, in social groups, friends, and hobbies they were once passionate about. In fact, it’s common for bullied students to withdrawal from activities that they once found pleasurable, which is a big indication that something is amiss to parents.

Victims of bullying admit to avoiding school when they see it as an unsafe environment. American statistics on bullying indicate that many as 7-percent of eighth-graders skip school or fake sickness monthly due to bullying. In many cases, bullying will increase student isolation,  depression and lower self-esteem, according to a 1994 study on bullying in American schools( from Batsche & Knoff). In many cases, these negative results transfer with bullied kids into adulthood.

Victims of bullying have a propensity to self harm due to a feeling of worthlessness—i.e., cutting arms and legs, pulling hair out, and even suicide attempts. According to the study by the Universities of Oxford, Warwick, Bristol and UCL, published in the journal Pediatrics, children bullied by siblings in early adolescence had double the rate of depression as young adults. The group of bullied kids also reported incidences of self-harm within the last year compared versus kids who had not been bullied.

Researchers reveal another side of bullying, aside from the school yard bully. The study looked at bullying right at home, revealing that victims of sibling bullying don’t have the safe haven and distance that many bullies at school do, once they leave school or a certain grade. Sibling bullying can take place over an entire childhood with little means for escape.

If your typically outgoing son or daughter seems suddenly withdrawn from a close group of friends or loses interest in close personal relationships, they could be suffering exclusion from peer victimization. This may result in a loss of interest in school or normally passionate social interests, hobbiest, or athletics.

A study published by the National Institutes of Health, found that peer victimization suffered during childhood, over long periods of time, in a severe manner,often result in psychotic symptoms in early adolescence and even into adulthood. This means that many childhood kids who are chronically bullied, end up with adult-onset psychotic disorders.

If your child is skipping classes, missing the bus on purpose and asking for a ride to school, walking a different route to and from school, or asking to change schools altogether, there is an issue. If they refuse to talk about it with you, that’s also an indicator.

According to a study conducted cooperatively by the Department of Criminology, Law and Society at George Mason University and the Department of Sociology and Criminal Justice, at Villanova University, entitled The Impact of Bullying Victimization on School Avoidance, which examined data collected by the 2007 U.S. National Crime Victimization Survey: School Crime Supplement, students will avoid locations in or around schools if they are or witness incidents of victimization in these locations. The study monitored bullying affects on 11,161 students between the ages of 12 and 18-years old.

If your typically energetic teenage daughter is suddenly fatigued for no reason something is not right. Intimidation by a bully is stressful and puts a victim in fight-or-flight response mode, resulting in difficulty sleeping. According to multiple studies, kids victimized by bullies tend to have more sick days, sleep problems, stomach and headaches compared to non-bullied peers.

On the flip side, a study from researchers at the University of Michigan, indicates that sleep deprivation may also be a prime cause for bullying behavior. When researchers looked at data collected from 341 Michigan elementary school kids, they surprisingly found that sleep problems and lack of sleep led to disruptive behavior in class and higher incidence of bullying behavior.

The School Crime and Safety report indicates that name-calling, spreading rumors, physical harm, personal threats, and exclusion from social groups (both online and group activities) is the most common form of bullying. According to research from  the Institute on Social Exclusion at Adler School of Professional Psychology in Chicago, recent bullying just compromised of threats and  shoves on the school playground. Bullies, rather than teasing and name calling now simply shun socially so bullied kids are not included in play, games, and sports activities.

The new bullying as a form of social exclusion can reach from childhood all the way into adulthood, according to Dr. Lynn Todman, the executive director at the Institute on Social Exclusion at Adler School of Professional Psychology, “Social exclusion is actively created by the structures and systems that organize and guide the functioning of our society…[and] determine the allocation of rights, resources, and opportunities such as food, safety, education, health, due process and shelter.”